Who says 3D printing to specific tolerances can’t be fun? Take a look at our take on the traditional LEGO brick.

I have designed a brick for 3D printing on our SLA printers and used some creative freedom along the way.

First of all, the critical dimensions of the brick and mating surface clearances were reverse engineered from an existing brick, then modified to our taste allowing for an interference fit. I wanted to test the printers accuracy and resolution as well. I decided it should be feasible to maintain a tolerance of +/- 0.005 in (+/- 0.127 mm) given the printers capability.

Before we jump into the bulk of this post I should mention that the CAD files for this brick can be viewed and downloaded on my GrabCAD profile.

Fortunately, SLA is one of the most accurate printing processes so there weren’t too many constraints to consider when designing the brick other than minimum wall thickness and overhangs for the intended orientation on the build platform.

As for the modifications from the original brick design, I removed the supports that extend from the inner center column to the 2 long outside walls and added supports connecting the 3 columns together. This was not completely necessary but it does provide some added strength to the thin columns and some support for the intended build platform orientation.

Bottom of brick with center connected columns and fillets.

I also gave generous fillets around the base of the columns for added strength and on all the corners for a more professional and finished look.

Fillets on outside of brick and small logo features.

The printer allows for a minimum feature height or thickness of  0.157 in (0.40 mm) which was taken into account for the logo and letters on each post.

The bricks were printed on a slight angle at a layer height of 50 microns to maximize the resolution and detail that the printer could reproduce. This also enables us to maintain uniform dimensional accuracy as well. 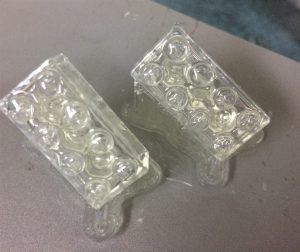 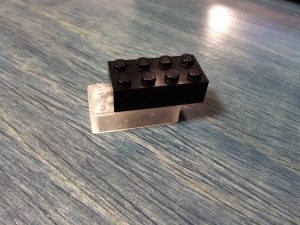 Fit between a standard LEGO brick and our custom brick. 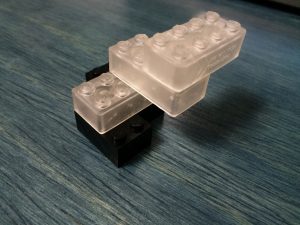 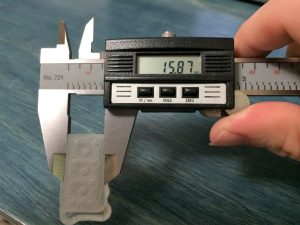 I’d say that is a success. Now I’m going to go and play with my super cool bricks.